I needed a wheelbarrow the other day. Had to mix a bunch of bags of concrete for a small slab I wanted to pour out in the old Mancamp area by the canal out back. Unless you do a lot of heavy yard work or construction work around the house it’s not something you usually have. They’re a bit pricey to start with and they’re big and bulky and difficult store for that one time you get to use it all year. So I asked my neighbor if he had one I could borrow.

He said he had one and was about to trash it. “It’s all screwed up. Doesnt even roll.”

I figured as long as the pan was good I didn’t need it to roll. I could just basically set it next to the slab form and mix the concrete in place. So I lugged it over. It’s a beat up old thing, rusty in some areas. Patchy with splotches of concrete and plaster and who knows what else all over. The ends of the wood handles were pretty much rotted and shot at the bottom and someone had replaced the wheel with a bigger wheel that didn’t fit properly and done a really shoddy job of installing it.

The nuts, bolts and screws holding the wheel brackets were either stripped or bent or too rusted to actually work. A nut was missing from one of them and nails had been driven in and bent in an attempt to keep the bracket from shifting and in turn keep the wheel from shimmying off. Whoever had replaced that wheel had done so in an obvious move of desperation. A last ditch effort to get whatever job was at hand complete and then be done with that rusty, rickety old thing.

“You can toss it when you’re done with it,” my neighbor had told me.

And I used it like that, too. Yeah, it was a bit cumbersome. Had it been in perfect working order I probably could have gotten the job done a bit sooner, maybe a bit easier. But, as it was, even with a wheel that wouldn’t spin and that would come off and dig into the ground, it actually helped me get the concrete mixed and the slab poured.

The slab is by no means perfect, but that’s not the wheelbarrow’s fault. That is all on me. I am by no means a mason and mixing twelve 80 lb bags of concrete isn’t something I do all that often, thank heavens. Still, tho, the slab is good enough for its purpose.

I couldn’t bring myself to dump the wheelbarrow after all the work was done. No. I rinsed it clean. Set it upright against the fence to let the excess water runoff. To keep the rust from rusting, I suppose.

The next day I went out back to see how the concrete had set. Hoping the forms hadn’t burst and concrete hadn’t seeped and oozed out all over the place. It still looked good. I was sore all over, but I stood there pretty proud of my work and incredibly thankful for that wheelbarrow that now leaned up against the fence, ready to be dumped.

The wheelbarrow, despite its aesthetic shortcomings and its utilitarian issues had still proven itself useful. So I set out to fix it.

I pried the wheel off, straightened the nails out and yanked them out, unscrewed what nuts I could and ground the stubborn bolts and screws right off. I studied the “this wheel is too big for this barrow” situation, figured out a plan and carried it out. I cut steel angles to fit, drilled holes in them, found new nuts and bolts and now the wheelbarrow, while it wont make any magazine covers, sits there ready for use. It don’t look pretty mind you, but it’ll work just alike any ole new wheelbarrow. 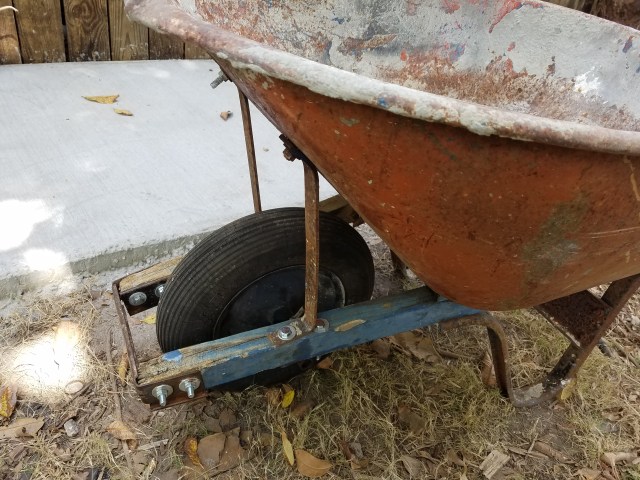 It’s now a working, useful wheelbarrow and I have my Dad to thank for that. Every tool I used to fix the thing was once his: the hammer, the little sledge, the long screwdriver, the angle grinder. I even found 8 brand spanking new bolts in one of his old nuts and bolts containers and a piece of angle iron I could cut to fit.

And the actual know how. The ability to examine the problem, to see what was available to me and to come up with a solution – and a good one at that – and to do the actual work required is something that like tools, Dad passed on to me.

Dad’s been gone 3 years and he’s still proving himself useful. He is still around getting shit done. How about that?

Can’t think of a better birthday gift that I could ever give him. Felicidades, Papi!

This entry was posted in Uncategorized. Bookmark the permalink.